The Heights project in Tampa to open next year with apartments, market and restaurants

TAMPA — As plans for the Heights project have sputtered and stalled over the years, new development began to sprout all around the vacant property north of downtown Tampa along the Hillsborough River.

Four years after Soho Capital purchased the 43-acre Armature Works property, developers are ready to unveil what’s next. And it’s not the site of the next Tampa Bay Rays stadium.

Soho Capital will transform the 68,000-square-foot building into an in-house market, co-work space, two restaurants and event hall space. In addition, the Heights will begin construction this summer on the Pearl, a four-building, 314-unit apartment community with 28,500 square feet of retail space.

And that’s just the first phase, which is scheduled to open next year.

The Heights is one of several new planned developments aimed at redefining downtown Tampa’s urban core. Similar to the $2 billion plan for the southern end of downtown spearheaded by Tampa Bay Lightning owner Jeff Vinik and Cascade Investment, the Heights will be a pedestrian-friendly “mixed-use” center that will offer entertainment, work space and shops, as well as a residential community. It will connect the growing neighborhoods north of downtown, like Seminole Heights and Tampa Heights, to the urban core through the Riverwalk.

Long-term plans call for luxury riverfront condominiums and a 260,000-square-foot office park with at least one hotel. The project is valued at more than $820 million.

“We’ve watched and waited, got our hopes up and dashed,” Tampa Mayor Bob Buckhorn said at an unveiling event for the Heights project Wednesday morning. “But we’re on the verge of something very special here.”

Construction has already begun on the Armature Works, which is scheduled to open early next year.

“This is one of the best sites in the urban core in Tampa,” said Adam Harden, one of the developers on the project. “We think we’ll anchor one end of the Riverwalk, and all the new development coming to Channelside will anchor the other end.”

“We’re both from Tampa, so this project means a lot to us. It’s our baby,” said Bruck, whose wife, Taryn, is also involved in the planning of the project as the director of events. “We wanted to create a unique space in Tampa that will serve residents here, not just tourists.”

Harden and Bruck traveled to cities like Austin, Texas, Portland, Ore., and Denver to find inspiration for the Heights.

They hired Tim Clemmons of PLACE Architecture, formerly Mesh Architecture, to design the look and feel of the site. It will include a historic water tower, which is similar to an original that at one time was functional on the property. The Armature Works building will stay true to its roots, too, as the original brick will remain, as will an overhead crane. Original doors, windows and skylights were restored. The building dates back to 1911; it served as a TECO trolly barn storage facility.

Perhaps the most unusual piece of the project is the “Heights Market” that will be housed inside a portion of the Armature Works building. The 22,000-square-foot open market will mimic those in other metro areas, including the East End Market in Orlando and the Krog Street Market in Atlanta. It will offer an array of restaurants in vendorlike stalls operated by local chefs and entrepreneurs, including Ichicoro Ramen, Fine and Dandy craft cocktails and Steelbach Ranch cheeses. Market tenants will host classes and private events.

A restaurant called Steelbach will anchor the market and will be run by BE-1 Concepts. There will be three event halls available for rent, including a rooftop patio with views of downtown Tampa and the Hillsborough River. A 3-acre green space separates the Armature Works building from the river, where paddleboards, kayaks and other watercraft will be offered for rent.

The Pearl apartments will be priced to attract millennials, young families and empty-nesters. It also is expected to open next year.

“The desire to get back to the urban core is huge, and we don’t see any reason for this project to slow down,” Harden said. “We see a lot of potential in this site and think that the excitement around other projects in Tampa will continue to fuel the momentum.”

About $8 million in infrastructure work on local area roads is expected to begin in August. The total project is funded by Soho Capital, a private real estate development company in Tampa. Developers declined to comment further on financing. 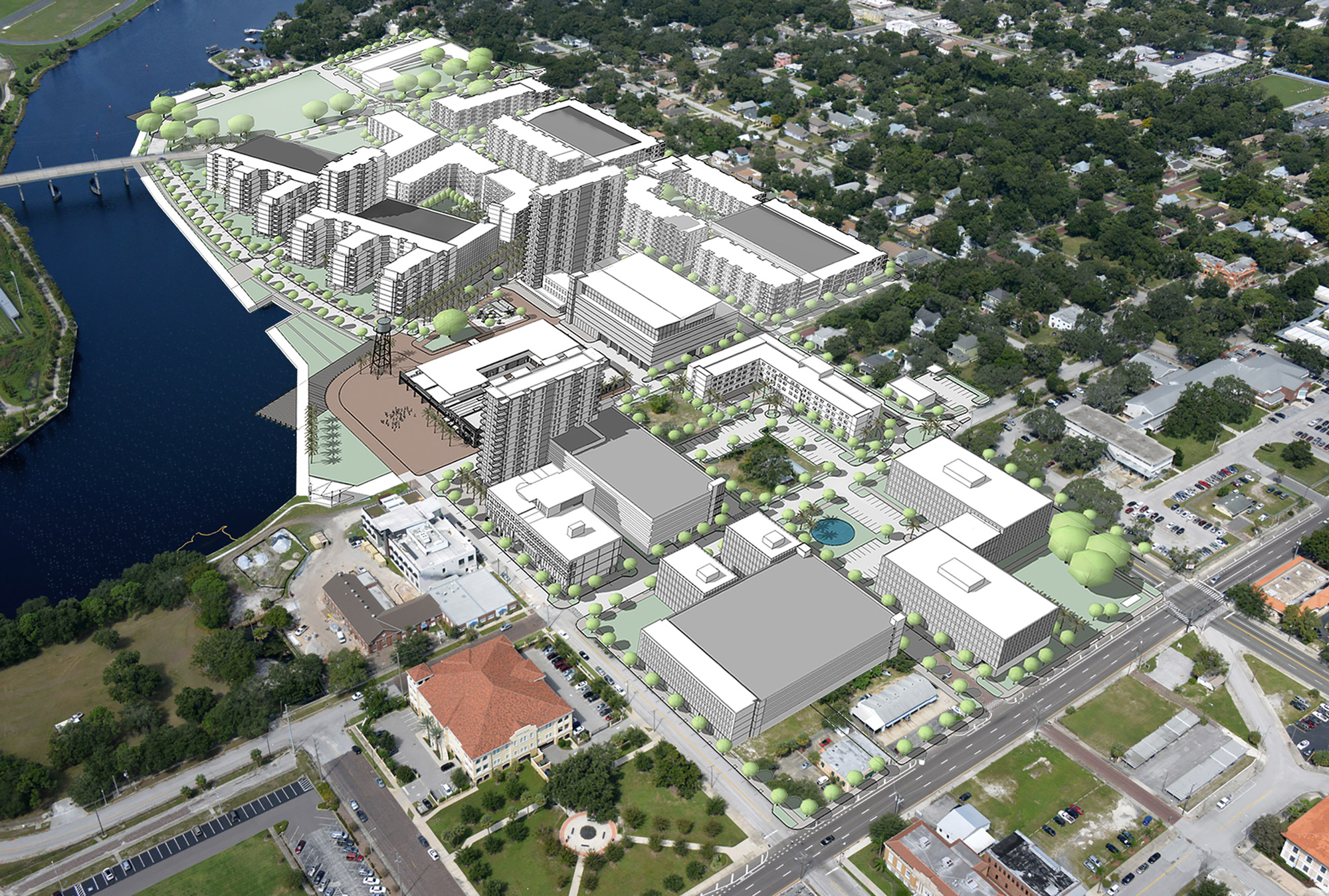