This project is conceived as a new anchor within St. Petersburg’s burgeoning Grand Central District. The project consists of two new buildings, a micro-brewery owned and operated by our client and a complementary for-lease restaurant building, totaling approximately 10,200 square feet. The three architectural concepts are urban presence, indoors/outdoors and craftsmanship. Although relatively modest in size, the front façade is designed to create a strong urban character along Central Avenue, St. Petersburg’s main street. The intent is to re-establish and extend the pedestrian-oriented corridor west of downtown. The entire site has been organized into a series of interconnected outdoor spaces of varying size and character. These include the well-defined public sidewalk, an intimate entry courtyard, an expansive beer garden framed by the two buildings as well as two roof terraces enjoying views of both Central Avenue and the landscaped beer garden. The indoor public spaces all employ large operable glass panels of various types to blur the line between indoors and out as well as to create one seamless visitor experience. Finally, the interior design focuses on the craft of beermaking. Refrigerated copper storage tanks are located directly over the bar and large interior and exterior windows reveal the brewing process to the patrons. As a complement to this concept, humble interior finishes are used in a way to highlight their inherent qualities. 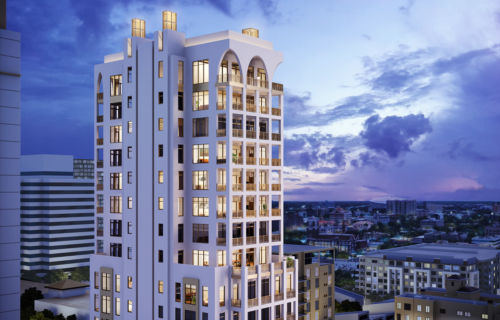